skip to main | skip to sidebar

"The Vanishing Point That Whistles" - An Anthology of Contemporary Romanian Poetry 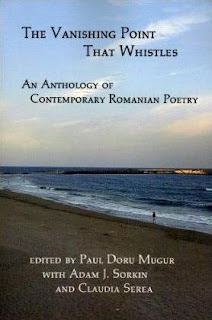 Book launch organized by RCINY. The anthology represents a joint effort to bring one of the most significant recent Eastern European literary phenomena - Romanian post-communist poetry - to U.S. readers. Published by Talisman House, with funding from RCI's Translation and Publication Support Program, the anthology coordinated by Doru Paul Mugur gathers more than 40 contemporary Romanian poets. With this new anthology, Talisman House continues in 2012 its line of publishing Romanian authors in translation.

The poetry included in this volume reflects the alienation and the crisis of communication brought by the so-called "transition" period of the last twenty years in Romania from the beginning of the post-communist period in 1990 to the close of the first decade of the twenty-first century. This twenty-year span was defined not only by uncertainty and fears, social inequities and misery, but also by both an enthusiasm and a hope for the future that the recent inclusion of Romania in the European Union made real.

This Romanian poetry arrives in the 21st century like a much needed remedy for the excessive stylistic inventions that seem to accompany what is soon becoming an almost universal postmodern aesthetic. It's a book that I'd want my graduate students of poetry and literary translation to read. --Roger Sedarat

Waking up from a familiar nightmare into an unknown reality is not for the faint-hearted. More than two decades after the world and the poetry that buzzed in it shattered, Romanian poets are putting on lab coats, turning on recording devices, scouring the web they broadcast on, photoshopping bits and pieces of shards and routine, and questioning the tragic undertone of the hardwired lament in a culture that questions itself incessantly. Anyone able to hear the sound this poetry makes will be rewarded with a sharpening of their own tools of perception. --Andrei Codrescu

While reading Vanishing Point That Whistles, the Latin word 'artus' came to mind: related to anatomy, it indicates a joint; symbolically the word refers to strength or power (and, poetically, to the limbs). My feeling is that this anthology of new Romanian poetry exists as an important 'artus' point: a place where one historical/literary tradition bends into another. At the same time it's a locus of strength, with a natural ability to reach powerfully outward. Even more, though, it's a source of pure reading pleasure from one of the world's most poetic places. If you haven't yet gotten acquainted with the brilliance of contemporary Romanian poetry, enter here. --Sharon Mesmer

As a part of 100 thousand poets for change, 2011 poetry was put on screen in the middle of Bucharest on 24th of September.
This is a first video (not the official one yet) fot the event we had in Bucharest with poetry on the biggest media facade in Continental Europe (560 square meters/6,205 sq. ft.). It was the first time ever, when Romanian poetry was presented on this surface.
It included poetry by classical, modern, and contemporary Romanian poets selected to illustrate the idea of change.

a galery of images from the event can be seen here

Etichete: 100 thousand poets for change, bucharest, LINKS TO AND ABOUT ROMANIAN POETRY 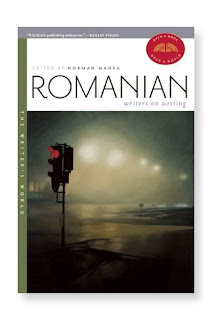 The collection Manea has edited of Romanian Writers on Writing (2011) is one of those books that opens up a whole world that overflows the banks of the present nation of Romania. It’s a world previously unavailable to all who must wait for translations into English. We have had bright flashes of that world in the amazing work of those who left Romania during the twentieth century and found readers and audiences elsewhere—driven out or voluntarily withdrawing from that oppressed place—including Paul Celan, E. M. Cioran, Eugene Ionesco, Mircea Eliade, Andrei Codrescu, and Manea himself (to say nothing of the artists Constantin Brancusi and Saul Steinberg, the pianists Dinu Lupati and Radu Lupu, the composer Georges Enescu). Only a few Romanian poets have been translated into English, among them Tudor Arghezi, Ion Caraion, and Benjamin Fondane (who wrote in French). Now Manea’s edited collection of Romanian writings on writing give us a fuller sense of how much we are missing. from The Center for the Writing Arts

Vanity doubled by vitality, vulnerability mixed in with force, and the fear of dissolution intimately linked with the desperate pride of defeating historical time confer upon Romanian literature a special tension, born from wandering and threat. The 81 writers gathered in Romanian Writers on Writing explore this unsettling tension and exemplify the powerful, polyphonic voice of their country’s complex literature. The Writer’s World series features writers from around the globe discussing what it means to write, and to be a writer, in other countries. The series collects a broad range of material and provides access for the first time to a body of work never before gathered in English, or, perhaps, in any language.

Etichete: English, LINKS TO AND ABOUT ROMANIAN POETRY, translations 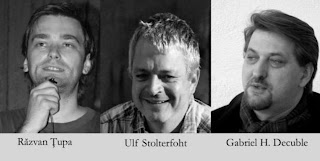 More info can be found HERE.

"New Romanian Scene: Poetry" is the first stage of the project "Crossroads of Literature ", which will extend until the end of September, and present new poetry, prose and photography from Romania and Moldova to German audience with the help of German-known authors. The second stage of the project (fall 2011) is devoted to new fiction from Romania and Moldova and its visual transmission in photography (the reading of three authors from these countries will form the prelude to a photo exhibition)

This project was conceived by Corina Bernic, cultural manager from Romania and funded by the Robert Bosch Stiftung.

Razvan Tupa (b. 1975) - poet, cultural manager. Since 2005 he has hosted the weekly reading series poetics of the quotidian in Bucharest, Club A, which he developed in 2009 in the relational poetics. He published articles in Romanian newspapers and magazines (Evenimentul Zilei, Prezent, Max, Suplimentul de Cultura). Between 2005 and 2007, he was chief editor of Versus-versum, then from 2006 to 2008 editor of cultural magazine Cuvantul. He attended readings in Rome, Paris, New York, Berlin, Prague, Chisinau, Bratislava and Budapest. 2009, he released together with the poet Andrei Ruse the poetry film “Poezie.puterea” (Poetry.The Power) with 24 Romanian poets. He published “fetis” (2001) and “corpuri romanesti” (2005). Lives and works in Bucharest.

Ulf Stolterfoht (1963). Author, translator. In the spring of 2000. Ulf Stolterfoht has published numerous volumes of poetry and translations. His work has won many awards, including Anna Seghers Prize (2005), Christine Lavant Prize, Peter Huchel Prize (2008). He was Fellow of the Villa Massimo in Rome in 2007. Since 2008 He is visiting Professor at the German Literature Institute in Leipzig. Editor: Christoph Buchwald Yearbook of poetry (Fischer 2008). Among the new releases (selected): “wood smoke on Heslach. Poems” (Urs Engeler Editor, 2007), “technical language XXVIII-XXXVI. Poems” (2009), “the Nomentano-manifest” (2009) “ammengespräche. rough books” (2010).

This project was conceived by Corina Bernic, cultural manager from Romania and funded by the Robert Bosch Stiftung. 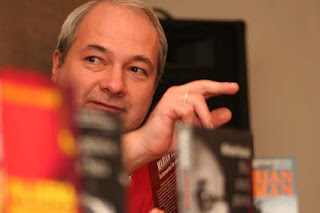 Mihail Gălățanu was born in 1963 in the Romanian city of Galaţi. He published his first book of poems,Stiri despre mine (News About Me, Bucharest: Litera) in 1987, his second, Scrîşnind în pumni (Keeping My Fists Tight, Galaţi, Romania: Porto Franco, 1993), six years later, and since then, the equivalent of a book of poetry or prose each year. Among recent poetry titles are Mormîntul meu se sapă singur (My Grave Digs Itself, Bucharest: Vinea, 2003) and, from the same publisher, Burta înstelată(The Starry Womb, 2005), from which these poems derive. Gălățanu was editor-in-chief of Playboy Romanian and a glossy monthly magazine, Flacăra; he currently edits a financial publication. (from Diode)


I never suffered claustrophobia. I never felt the least claustrophobic in my mother's womb. Neither lonely nor downcast. How can you feel lonely when you're inside another, a woman?
When another being takes you in, contains you?
At most, you can be
happy.
I never was a claustrophobe.
My life had a happy ending.
Birth.
And my birth is endless.
(...)
(The entire poem can be read translated from the Romanian by Adam J. Sorkin and Petru Iamandi for Asymptote Journal)
Publicat de Razvan Tupa la 3:55 AM 1 comment:

To listen To see

To read on literature or poetry


Poetry Festivals around the world